The following is the complete text of the performance as presented on August, Friday 8th, at regular intervals between 6 and 8pm.

This performance is an addendum to 2014, CollectNConnect, an artwork that, taking as the starting point the local environment in which ASC Gallery is situated, takes on the task of responding to the art support provided by the Window Space.

Please scroll to the bottom for a link to the audio file, recorded at 20:41 hours.

Good Evening and thank you for coming,

Right now I would like to direct your attention away from the shop window and onto its side.

Here, we find marble tiles, and right at eye level, what remains of what must have been two brass signs.

Well below we have the architects name. Architects know how to make markings last, by carving their name in manner of Egyptian Pharaohs they have survived what used to be displayed prominently above.

Now, notice the rust around where the screws used to be, it looks like they wanted it to last. Only it has not.

The top sign was placed by South Bank University, from humble beginnings they now they have their own purpose built edifice, complete with gleaming everything you can think of and squares and walkways and lots of students from all over the world, currently lodging across the road. Only time will tell whether they survive the oncoming onslaught.

Excuse the doom scenario language but I am now moving on to the second sign you can perceive.

This sign refers to the first owner of this building. The Post Office, then British Telecom, now BT, tomorrow, Broadband Time? Who knows!

It read, Erlang House, handed over on 8 July 1974 to Broderick Telkjem, Esq., managing director of telecommunications.

The building is named after Agner Krarup Erlang (1878–1929), a mathematician and engineer after whom the unit to measure traffic in telecommunications is named.  So if you want to live for ever, name something, just make sure this something will be in use in a thousand years from now.

Now Mr Telkjem, Esq. back then a name like Broderick Telkjem did not have the same meaning as it would today. Broderick was a child destined to great things. Born to Turkish parents, his father was determined his child had none of the difficulties he had faced. Too proud to change his surname, a well known Turkish orthodox name, he gave his son, for he was a SON, a suitably grand-sounding name, Broderick.

Broderick went to public school [long pause] his father would tell him his name would toughen him up in the face of the constant bullying by Bertrand and Terence.

And that school would come of use when his friend and long term sufferer of various bullying, Benedict, would put his name forward as an executive with the Post Office.

Ten years to the day this plaque was unveiled, he disappeared.  His wife had long left him for a Greek waiter she met the one time they decided not to holiday in Spain, his daughter had not spoken to him in years and his son was a disappointment.

Rumour has it that a car came one night, driven by his heavily bearded son, and that they both disappeared to the Shetland Isles, never to be seen again,

[Stage Note: After the reading is done, the pad becomes a lime green cardboard plaque encasing both sign remnants, with letters carved in the gap between them that reads: THE TEXT ON THESE PLAQUES REMAINS UNKNOWN 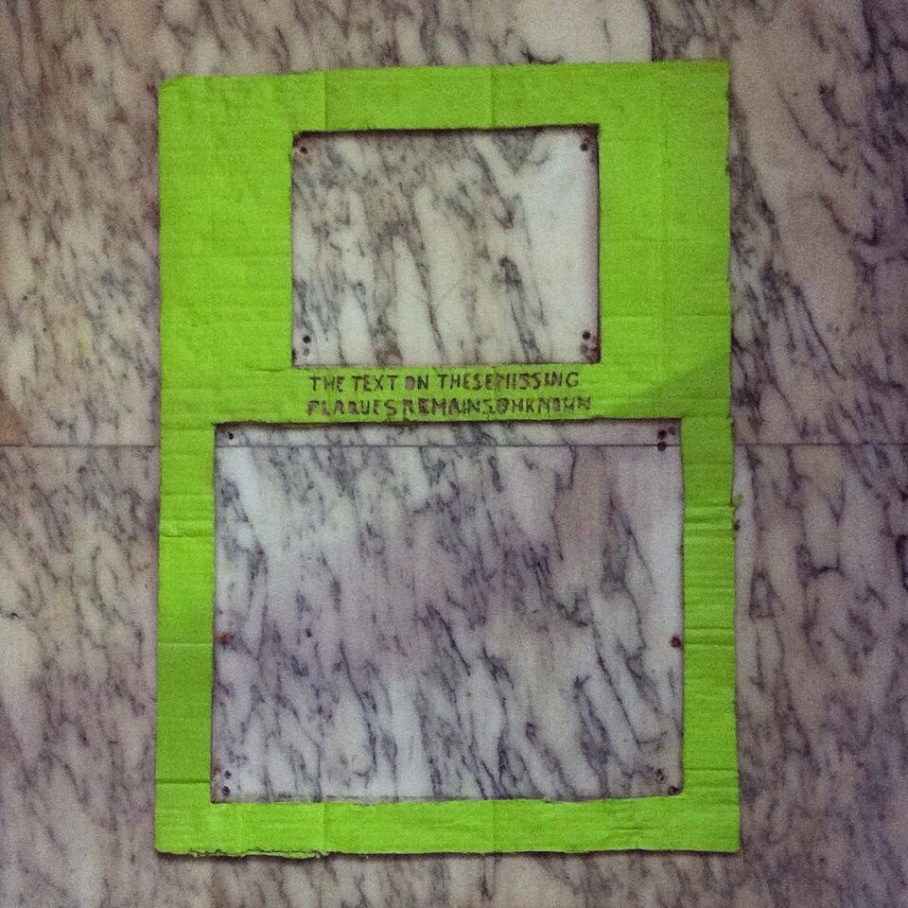 The first of two performances